Nassau is the capital of the Bahamas and home to 70 percent of the population of the entire archipelago. The city holds historic colonial buildings along Bay Street, its main thoroughfare, and the Straw Market, which offers intriguing souvenir shopping for traditional items woven from straw as well as batiks and wood carvings. Boats run from Nassau's port to exquisite Blue Lagoon Island for swimming with dolphins and a day relaxing on a quiet beach.

Nassau's harbour is the launching pad for a fast speedboat ride to the Exumas Islands, an hour away and an ecotourist's dream destination for its indigenous wildlife; including friendly iguanas, deserted beaches and tropical jungles. Grand Bahama Island is a nature lover's delight and ideal for water sports, horseback riding safaris, birding and getting away from it all on a tour of one of the island's three national parks.

Set on small Paradise Island which is linked to New Providence is Aquaventure Water Park, a top-of-the-range splash experience that is perfect for families during holidays to Bahamas. Its Thrill Ride holds over 20 million gallons of water, and there's a mile long river ride complete with rapids, speed slides and 20 swimming areas. For young children, there's a water-play castle, and its 11 swimming pools are surrounded by stunning tropical scenery.

Nassau's Bennett's Hill and its fort present a breath-taking view for visitors, accessed by the most-visited attraction in the city - the Queen's Staircase. The 65 steps were hacked out of the solid limestone cliff by slaves in 1795, using axes and other sharp hand tools. Almost 100 years later, the staircase was dedicated to the 65th anniversary of the coronation of Queen Victoria.

The Pompey Museum of Slavery and Emancipation in Nassau is set in the colonial Vendue House on Bay Street. It tells the tale of slavery on the island from its own history of use as a slave market - a different perspective on a topic that still holds huge resonance in this part of the world. Nassau's Pirate Museum is totally interactive, great for children of all ages and harks back to the early 18th century when the harbour was a haven for Blackbeard and other infamous pirates. A replica of a pirate ship, mock battles and theatrical shows add to the fun. 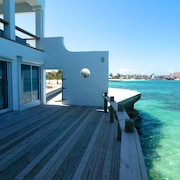 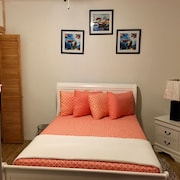 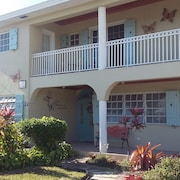 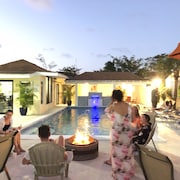 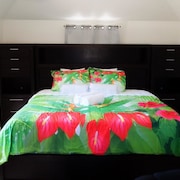 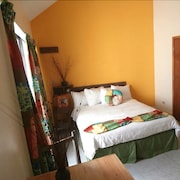 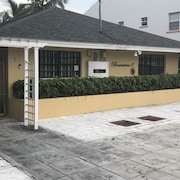 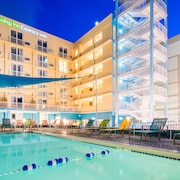 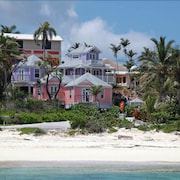 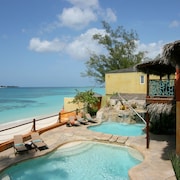 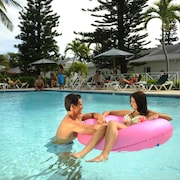 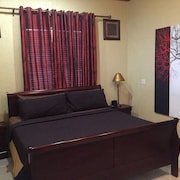 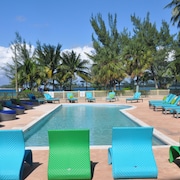 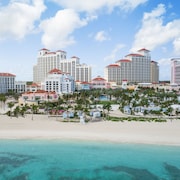 British English, the official language of the Bahamas, is spoken, particularly by those within the tourist industry. Due to the wide ethnic mix of the Bahamian community, many other languages are in use as well, with the most prominent Bahamian Creole, a dialect originating with the freed slaves who flocked to the islands in the early 19th century, although you should always be able to find an English-speaker when you need one.

The official currency in the Bahamas is the Bahamian dollar (B$), however the US dollar (US$) is also widely accepted. On the main island of New Providence, ATMs and currency exchange facilities are easily found, as is the case on Grand Bahama Island, but are rare or non-existent in the Out Islands. In the Bahamas, having a mix of cash and credit cards is the best solution, although on New Providence, most large outlets and restaurants accept credit card payments.

An extensive list of nationals who do not need visas to enter the Bahamas includes citizens of the UK, the USA, Australia, Canada and New Zealand. Nationals of countries not on the list should apply for a visa at their nearest Bahamian embassy or, if there is no Bahamian diplomatic post, at the nearest British embassy. You will need a passport, however, and it is important to make sure this does not expire during your stay - make sure it is valid for your return journey too, with a little extra leeway to account for any delays you might experience.

The climate of the 700 islands and 2,000+ cays forming the Bahamian archipelago is sub-tropical to tropical. Typically, weather here ranges from hot to very hot, although occasional cold snaps relate to similar untypical cold spells in nearby Florida. Humid summers and warm winters are typical, with summer daytime highs of between 23 and 31°C, and winter lows of between 17 and 25°C. The wettest months are June and August, and sea temperatures are 23°C in January and 28°C from June through September. The hurricane season runs from June through November.

Lynden Pindling International Airport is located on New Providence Island, close to Nassau, and is the main air arrivals hub for the archipelago. Flights from the USA operate as domestic flights due to US pre-clearance facilities, although there's no such convenience for flights from the UK. Flights run to the archipelago's smaller airports and to the international airport at Freeport on Grand Bahama.

UK visitors can travel to the Bahamas from London-Heathrow, with routes for US travellers including New York, Chicago, Washington, Philadelphia and Charlotte. There are no direct connections with the UK at present. Flight time from London to Nassau is around nine hours and 40 minutes.

There is only one direct flight to the Bahamas for UK travellers. One way to avoid the UK's flight taxes is to take a budget flight to Milan and pick up a seasonal flight to Freeport. Taxis on the islands are expensive and buses are unreliable, making car hire or mail boat the best ways to get around.

Many people arrive in the Bahamas by cruise ship or even yacht. If a Caribbean cruise is out of your budget, you could consider a side trip to the Bahamas during a holiday on the US eastern seaboard as the islands are around three and a half hours by express ferry from Fort Lauderdale and slightly longer from Miami.