By far the most popular of the Emirates, Dubai has managed to turn itself into a world-class destination virtually overnight. Dubai is certainly a city of superlatives and prides itself on providing tourists with luxury at every corner. With the best bars, the best shopping opportunities and the most famous restaurants, there is absolutely nothing average about this city. There are many notable landmarks - the Burj Al Arab, the most iconic building of them all; the Burj Kalifa, the world's tallest building; and the Palm Islands, a hotspot for many travellers. The idea for the Palm Islands came from the Prince of Dubai and work began in 2001. They comprise of three manmade archipelagos; Palm Jumeirah, Deira Island and Palm Jebel Ali, all of which feature palm-shaped fronds that extend out into the Persian Gulf. The plan is that these will host hotels, villas, marinas and visitor attractions such as water parks and theme parks. In the meantime, visitors are catered for by the huge Dubai Mall, the Wild Wadi Water Park and the dozens of high-end hotels that line Jumeirah Beach.

The largest of the Emirates and the capital of the UAE, Abu Dhabi is one of the most modern and advanced cities in the world. Abu Dhabi offers tourists everything from top-notch golf courses and camel racing events to high-rise malls and beautiful mosques. Travellers in Abu Dhabi are bound to find activities to suit their requirements.

Perhaps one of the most beautiful cities to visit on holidays to United Arab Emirates, Al-Ain is the fourth largest and one of the greenest. A popular holiday destination with the Emirati elite, Al-Ain is the natural yin to Dubai's and Abu Dhabi's considerably developed yang. There are several resorts in the area which are home to, among other interesting attractions, a camel market, Al-Ain Zoo and the Al-Ain National Museum.

For travellers looking for a slower pace of life, Umm al-Quwain is just the place. Umm al-Quwain's terrain is some of the most interesting, as the city spans the coastal greenery of the Persian Gulf, all the way to the golden sand dunes of Falaj Al-Mu'alla. A visit to Umm al-Quwain will probably be the most traditional Middle Eastern experience for tourists on package holidays to United Arab Emirates. 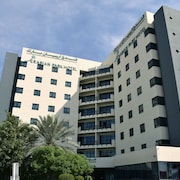 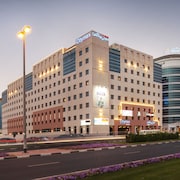 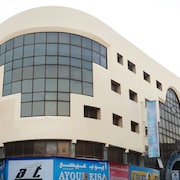 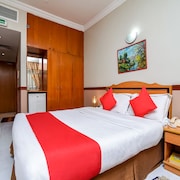 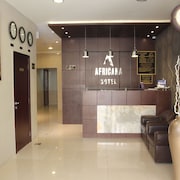 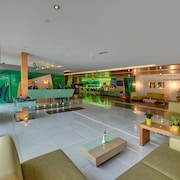 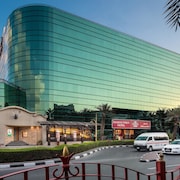 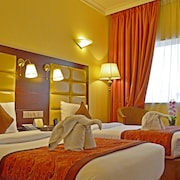 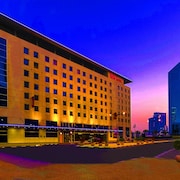 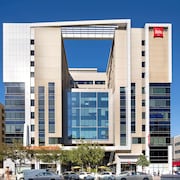 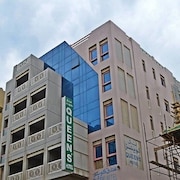 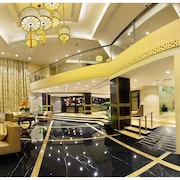 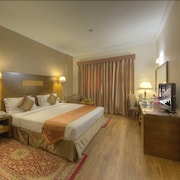 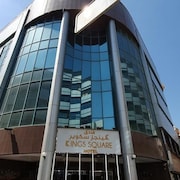 The official language in the United Arab Emirates (UAE) is Arabic. However, because of the large expatriate population in the region, other languages like Omani and Hindi are commonly spoken. English is widely spoken in the business, education and tourism sectors, particularly in Dubai and Abu Dhabi. Dubai, Sharjah and Abu Dhabi have become popular destinations in recent years for UK expats. This means that in modern day UAE, there are a whole host of English-speaking communities.

The official currency is the UAE dirham, which is subdivided into 100 fils. ATMs are readily available in shopping malls, hotels and on the side of roads. Most ATMs accept international debit and credit cards. Currency can be exchanged at large hotels, major banks and bureaux de change in most shopping malls.

Travellers from certain countries, including the United Kingdom, can attain a 30-day visa free of charge on arrival at any port of entry. Travellers who do not qualify for this exemption are required to attain a visa in their home country before heading on package holidays to United Arab Emirates.

The climate in the UAE is largely dry and warm, with the region seeing few rainy days. Summers tend to be harshest from June to September when the mercury rises to highs of 45°C. The humidity during summer can also be high, due to a humid south-eastern wind called the Sharqi, which mainly affects the coastal areas. The traditional summer holiday months of June to August are a lot cheaper due to the sheer heat, but tourists can beat the sweltering conditions with air-conditioning and temperature-controlled swimming pools. Temperatures are cooler between October and April. February to April is a popular time to visit for tourists, although hotels will be charging their highest prices during this peak season.

National airlines of the UAE and other major UK carriers offer regular services. These airlines travel between London-Heathrow, London-Gatwick and Manchester to Dubai and Abu Dhabi. Flights can be found for reasonably low prices, especially if they are booked in advance. The average flight time between London and the UAE is 7 hours.

United Arab Emirates holidays are becoming increasingly popular among tourists. It is, therefore, best to book accommodation and make travel arrangements ahead to avoid disappointment and high prices. UAE laws and customs differ significantly to those in the UK - research these before you begin your trip to make travelling through public areas and airports as easy as possible. Things to take into consideration include dress code, especially for women.

It is possible to reach Dubai and Abu Dhabi by boat, but services typically only operate from Gulf or Indian cities. Neighbouring Oman and Saudi Arabia both have excellent road links with the UAE.